Coconut(Cocos nucifera) is one of the highest nutritional and medicinal plant with various fractions of proteins. It plays a major role in biological applications such as antioxidant, hypoglycemic, nephroprotective, antimicrobial activities. Each part of the Coconut has different constituents, the pharmacological effects of the plant vary according to the part of the plant. Coconut is known for its versatility ranging from food to cosmetics.

Coconut meat is the fleshy and edible part of the Coconut. It serves as a regular part of diet for some individuals. It used for the production of coconut milk, which has seen its medicinal use across the world. Processed oil from dried coconut flesh can be used in production of soaps and cosmetics.

Coconut milk is produced from an emulsion of the grated meat of a mature coconut using hot water. It contains a high amount of saturated fat. The coconut milk is used in the production of coconut oil, coconut milk powder, coconut cream, syrup. 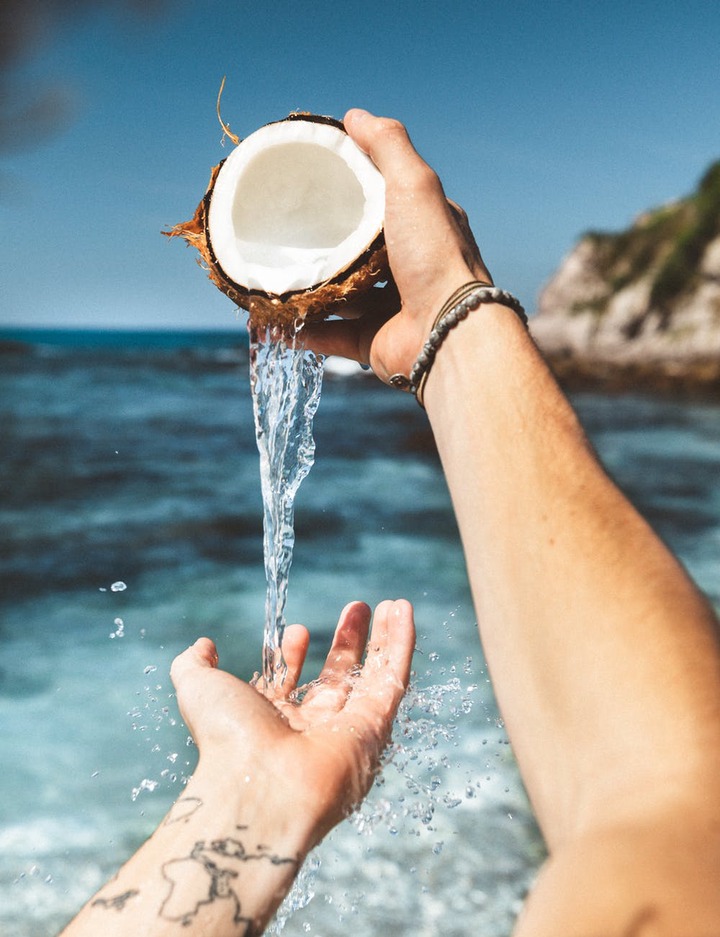 Coconut water is a clear liquid found inside mature and immature coconut. It is rich in carbohydrates and electrolytes such potassium, phosphorus, magnesium. It has a high proportion of electrolyte , which makes it useful in prevention of dehydration in children with mild diarrhoea. It has an antihypertensive activity. This lowers the high blood pressure when taken in the right dose . It can be drunk fresh and contains a low amount of calories. Coconut water seems to have protective effects on the kidney and heart. and antioxidant activity, as well as a hypoglycemic effect. Coconut Water is likely safe for both adults and children. Not enough is known about the use of coconut water during pregnancy and breastfeeding.

Coconut Water is an excellent cleanser, among the best natural antibiotics known. It strengthens the immune system and helps to prevent illnesses.

Coconut oil which can be used for culinary and non culinary purposes, is also derived from the fruit, after undergoing series of process. Coconut oil contains a certain type of fat, that works differently other types of saturated fat in the body. It has a moisturizing effect on the skin. Early research shows that it is used for skin infections, diabetes, dry skin, crohn’s disease, diarrhoea, irritable bowel disease.

Not: Saturated fat can raise blood cholesterol levels and put one at risk for heart disease.

The fibrous husk(outer part of the coconut fruit) is used in some parts of the world for their analgesic properties.

Effects of Coconut on medications.

Judging with the above mentioned plant’s medicinal value it can be concluded that each part of the coconut has it own pharmacological property of which when taken with other drugs with same properties can lead to drug-food interactions.

Coconut water has a moderate interaction with antihypertensive drugs.

So, someone already on blood pressure lowering drugs might want to consult with their doctor before drinking coconut water.

Also, coconut water might interfere with blood thinning, so it is suggested not to drink coconut water up to two weeks before and after any surgery.

Coconut water along with anti hypertensive medications causes the blood pressure to go too low. Coconut water is administered to neutralise the effects of drugs taken.

It is not known if there is any drug interaction with Coconut oil.

1 reply on “Coconut and its effect on medications.”

This is really great… we’re so proud of you♥️

What   is    peptic    ulcer   disease. Peptic ulcer disease is an open sore or a lesion found within the …

Coconut and its effect on medications.

Coconut(Cocos nucifera) is one of the highest nutritional and medicinal plant with various fractions of proteins. It plays a major …

How to get your man to propose.

Ways to get him to propose. There are so many ways to get the man of your dreams propose to …

These are the common misinformation, fallacies, mistaken beliefs and ideas that individuals have about the COVID’19 that has been proven to …